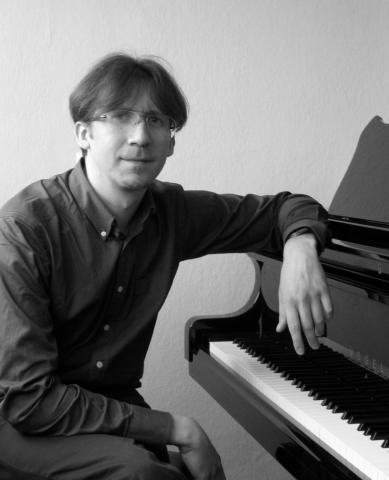 Piotr A. Komorowski, composer and music theorist; b. October 14, 1977 in Łęczyca. He began his musical education at the State Music School I and II in Kutno, which he attended in 1989-1997. In 1997-2002 he studied music theory at the Faculty of Theory of Music and Composition at the Music Academy in Bydgoszcz. From 2002, he continued his studies at the same faculty in the composition class of prof. Marek Jasinski, which he graduated in 2005. In 2010, he defended his doctoral dissertation in composition at the Academy of Music in Kraków entitled "Symphonic piece 'Rozbłyski' as an example of using CAC in my compositional language."

In 1992 and 1993 he took part in the Jazz Music Workshops in Puławy organized by the Polish Jazz Association.
In 2007 he participated in the "Identity of Sound" workshop led by the Serbian composer Miroslav 'Miša' Savić, as part of the BELEF'07 Festival in Belgrade, which resulted in a joint electronic composition 'Harmonia Mundi'.

Decorated by the Minister of Culture and National Heritage of the Republic of Poland with the honorary badge "Meritorious for Polish Culture" (2016). In 2010, the Polish Society for Contemporary Music recommended the song "Rozblyski" to be performed during the World Music Days "Zabrzeb 2011". Winner of the Youth Circle of the Polish Composers' Union competition (2007). Winner of the 2nd prize at the 5th Intercollegiate Competition for Fugue organized by the Music Academy in Bydgoszcz (2000) and a scholarship holder of the Minister of Culture and National Heritage (2001).

From 2003, he was employed at the Institute of Music Education of the Kazimierz Wielki University in Bydgoszcz, as well as at the State Music School of the 1st and 2nd degree 'Karol Kurpiński' in Kutno. In the years 2004–2008 he was a member of the Youth Club of the Polish Composers' Union. From 2008 he was a candidate member, and from 2016 he is an ordinary member of the Polish Composers' Union. Since May 2011, he has been the president of the Kuyavian-Pomeranian Branch of the Polish Composers' Union. The organizer and one of the originators of the NOWA MUZYKA Festival of Contemporary Music, which has been taking place since 2013 in Bydgoszcz. His works were performed by many renowned bands, including Pomeranian Philharmonic Orchestra in Bydgoszcz, Gorzów Philharmonic Orchestra, Polish Chamber Philharmonic Sopot, Bydgoszcz Chamber Orchestra, Accordion Chamber Orchestra, Academic chamber hor "Liceum" from Kragujevec (Serbia), ArtOn Quartet, OPIUM Quartet, Nova Quartet, Barock Quartet, Triumphal Brass Quintet; conductors: Kacper Chabrowski, Waldemar Groń, Marek Głowacki, Miloje Nikolić, Wojciech Rodek, Marcin Tarnawski, Rodrigo Tomillo, Monika Wolińska; soloists: Jan Bałaban, Lech Bałaban, Jarosław Ciechacki, Łukasz Czekała, Jadranka Jovanović, Leszek Lorent, Stanisław Miłek, Witold Kawalec, Julia Samojło, Tomasz Strahl, Bartłomiej Sutt, Piotr Sutt, Krzysztof Sowiński, Jelena Tomašević, Bartłomiej Wezner. His music has been performed in Poland (NOWA MUZYKA festivals, concert of the Youth Club of the Polish Composers 'Union during the "Warsaw Autumn" 2007 festival, concerts organized by the Kujawsko-Pomorski Branch of the Polish Composers' Union), as well as abroad (BELEF'07 festival in Belgrade, Veliki Školski Čas 2010 in Kragujevac, the International Percussion Competition under the auspices of UNESCO and the Percussive Arts Society of the USA in Montesilvano, Italy).

He has recently focused on issues related to the use of computer-assisted composition (CAC) in the creative process. It also acts as a free software translator. He is an author of polish translation of programs such as GNU Solfege, MuseScore and Frescobaldi.